This is something I found in my grandma’s recipe notebook and thought it sounded interesting. The notebook is a little scrappy one, with no cover (shock horror! If Grandma Wheeler were still alive, she would have recieved a fancy new notebook for Christmas) and the contents are often equally scrappy, meaning there’s often a small amount of guess work. Here’s the recipe as it stood, word for word:

Divide mixture into sections and to each add a diff. food colour, or cocoa to one mix.

Grease a 7″ baking tin and drop a little of each coloured mixture into the tin, till all mixture used up.

Now, this seems quite straightforward, but if you are going to attempt this, here are some handy tips…

DOs: Use butter instead of marg if you wish, it’ll be fine. Really make sure the flour is mixed in well; there’s a lot of it! Thus, when it says ‘drop a little of each mixture’ what it should really say is ‘thwack it off the spoon’. Seriously, with all that flour it’s never going to be dropping consistancy. I made a MESS doing this.

DON’Ts: Be careful what kind of tin you use. I used a round one, which was fine, but it meant that the mixture went in lumps side by side; I think it would be much easier to use a loaf style tin, and try to layer the mixture. If you do dollop, (which does provide a nice effect still) when you’ve dolloped the mixture into your tin, don’t just leave it; I was in a rush and made the mistake of leaving mine in dollops, and ended up with a… textured surface… I think perhaps trying to level it would have been a good idea. 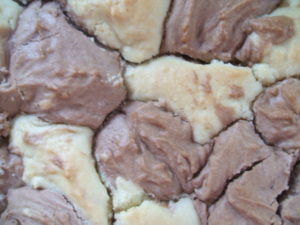 However, once it was cut up it did look rather pleasing. 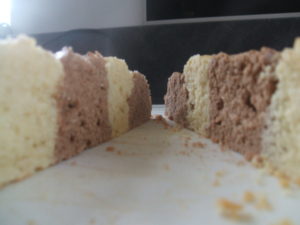 Due to the cornflour, the taste and texture was a bit different to regular sponge cake; however, not at all stodgy or heavy, which was my worry. It was in fact rather tasty.

I love making teeny tiny books with my smallest sc

How would you describe my business? I primarily ma

A little bit bigger than my usual stationery rolls

Another sneaky peek at the new range I'm working o

Some of my current fave journals - the top one has

When you start bookbinding, you learn that waxed l

As I work with rescued leather, it's not often I g

A lovely trip to London yesterday with a brief sto

Work in progress/sneak peek 👀 New range on the

I recently finished Persepolis; such a great read.

You can find a collection of cute and colourful pl

This week is National Stationery Week! I don’t n

Today I dropped off some stock at @northamptonshoe

I've been experimenting with adding pockets or spa

Astrolabes, compasses, sundials, oh my! So much in

Folding some origami Samurai helmets to sit on my